Headed south-east to cover a few yet-to-be-traveled streets within the triangular area bordered by Bank, Heron and Walkley. Getting there by bike, especially from downtown, can be pretty tricky. This is my preferred circuit. Apart from the narrow section of road between Hogs Back and Riverside Drive,the route is mostly bike path or quiet road.

If you are early enough you can catch soldiers from HMCS Carleton, a unit of the Canadian Forces Naval Reserve on a morning run in full fatigues. That’s them barely visible between the trees.


Crossing the canal at the locks at Carleton University, and following the bike path on the opposite side up to Hogs Back, you might happen upon a duck family like this one.


There are many wonderful views of Hogs Back Falls to be had from pathways on either side and above.

Along Brookfield Road, just before reaching the Airport Parkway there is a fun section of bike path that dipsy-do’s under the parkway, over a stream and across two train tracks before continuing on as Brookfield Road on the other side.

There is then another short path at the end of this section of Brookfield that cuts through to Bank Street.
From there you’re on your own.

A section of today’s ride took me down a path that runs alongside Nepean Creek between Merivale Road and Prince of Wales Drive. It’s a little nature sanctuary, with vigorous building construction and development on the south side.

Along the path I came upon two poems cast into bronze plaques. Down the Merivale Road by William Wilfred Campbell and Le cronyism by Alfred Garneau. Turns out this trail is part of the Poets’ Pathway which, until today, I knew nothing about. I look forward to exploring more of it on my biking adventures.

Neat name for a street so I checked it out – quiet, no sidewalks, big coniferous trees on the west side, and this fabulous garden on the east.

Then I ventured across Howe Street into the Village of Britannia. Now part of Ottawa, it still retains it’s own quaint and quirky personality. This wiki link tells you more about its history. These images show some of it’s quirky mix.

A bit further on is the Britannia yacht club.
This very cool tall ship called the Black Jack was docked there.


If you aren’t intimidated by the MEMBERS ONLY – ALL OTHER TRESPASSERS WILL BE PROSECUTED sign, you can venture a bit further around the inlet where the boats are docked to get a glimpse of the Des Chênes rapids, however a more impressive view can be had from the other side of the Ottawa river. A bike route to get there is nicely described here.

Venturing further downstream along Cassels Street one passes a little birders paradise. Lot’s of feeders and places to sit and bird watch on the edge of Mud Lake. The road ends at the Britannia water filtration plant. This location affords lovely views of the Ottawa river without the threat of being arrested.

Biked to and along Thurston Drive, because I never have before.

From Pleasant Park I joined a bike path which takes you through the Kilborn Allotment Gardens – an amazing HUGE community garden. This photo doesn’t do it justice – you have to see it for yourself.

Mika and I tend a little vegetable plot in the much smaller community garden at Lisgar and Lyon. I highly recommend it, even if you don’t know how to garden. I never even grew my own dandelion before we started ours last year, and we managed to cultivate some wonderful veggies, especially tomatoes. Community gardens are a fabulous way to meet people of all walks of life and share their gardening customs and preferences.

So, turns out Thurston Drive is a business park, as this wonderful period sign announces when entering off Conroy Road. I’m thinking 1970’s, back when the city crest was it’s logo, and poured concrete was very stylin’. 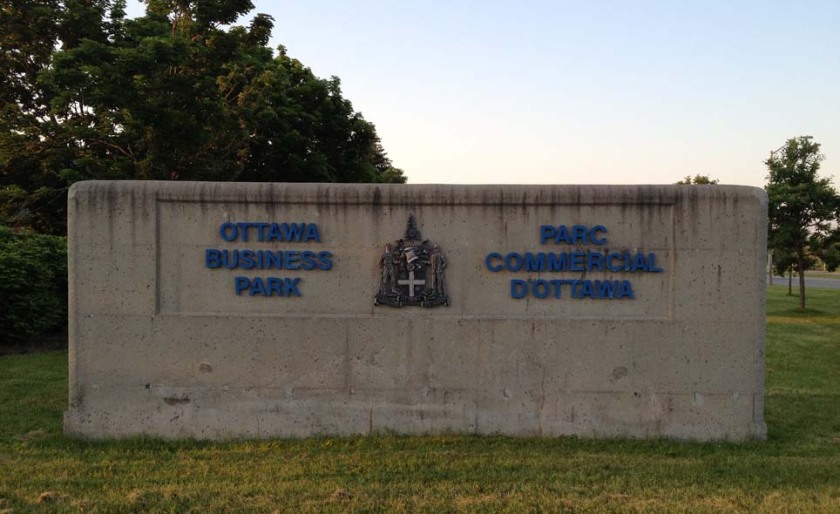 Here’s what can be seen at the other end of Thurston Drive.

Here is a fabulous ride to Petrie Islands Park along the Ottawa River Pathway. Starting from Centretown it’s a 27 km ride one way, or 54 km return.

It’s always a good sign when long sections of the chosen bike route are designated as dark green in Google Maps. That means bike paths.

The Ottawa River Pathway is the most serene ride in the region. Long stretches hugging the shoreline without interruption and the sound of the tight packed stone dust crunching beneath one’s tires is mesmerising, particularly in the early morning as the mist rises up off the river and teams of rowers can be seen gliding across the water’s surface.

Once arrived at Petrie Islands Park you can go for a hike along the Turtle Trail and River Loop Trail. The info centre is very precious, run by volunteers who are passionate about conserving this natural habitat. There’s also a very nice beach on Petrie Island.

On the way back I took advantage of the NCC Sunday Bikedays whereby on Sundays throughout the summer they close off major parkways under their jurisdiction to motorised vehicules. The level of participation I witnessed along the Rockcliffe Parkway was incredible – all ages, on all sorts of bikes and rollerblades. Very inspiring.

I chose a route through Gatineau that took me past the dépanneur on rue Laramée whose owner recently fought off two robbers with bear spray, spanking one of them as he jumped over the counter. Click here for more.

Yes, we have our very own!

Here’s where you can find it.