Back at the turn of the 20th century Ottawa had an incredibly creative and forward thinking character by the name of Thomas Ahearn. He achieved a myriad of ground breaking technological achievements in his time. For example he brought electric lighting to all our city streets way before the rest of the country caught on. With his business partner Warren Soper he created the Ottawa Electric Railway Company, building a network of streetcars and tracks whose routes opened up the city. He also designed and patented a number of electronic products, like the first electronic oven. He also drove an electric car. This bike tour visits a few sites in memory of Ahearn’s contributions to the development of Ottawa.

For a more detailed description of Thomas Ahearn I recommend checking out this Ottawa Citizen link . I have also included a number of other links at the bottom of this post.

Our tour begins in Lebreton Flats where in 1855 Thomas Ahearn first arrived on the scene. His parents were Irish immigrants who lived on the Flats where his father worked as a blacksmith. At the age 15 or 16 Thomas went from his home on the Flats to the J.R. Booth Company to offer his services in exchange for learning the exciting new technology of telegraphy.

On the Southwest corner of Booth and Sir John A MacDonald (SJAM) Parkway, across the street from the War Museum, sits an interpretive display on the history of Lebreton Flats. A heritage, non-functioning, public fountain acts as it’s introductory focal point. The original working fountain was commissioned in part by Ahearn himself in tribute to his mother-in-law Lilias Fleck, and was re-discovered when the soil in Lebreton Flats was being de-contaminated in the 2010’s. Further within this interpretive exhibit are two panels that touch on Ahearn and his many exploits. Lebreton Flats is where Thomas’ adventures began!

After working for a few years in New York City, the hi-tech hub of the era, Ahearn re-settled in Ottawa and in partnership with his old friend from the Flats, Warren Soper, he built up a number of successful companies which they managed from their headquarters on Sparks Street, which is our first stop. To get there our route passes through the Garden of the Provinces and Territories park. At the south/east end of the park there is a ramp to get up to Sparks Street but it is quite narrow so we carried our bikes up the short flight of stairs.

In 1927, Thomas Ahearn was chosen by Prime Minister MacKenzie King as the first chairman of the Federal District Commission, the predecessor to the National Capital Commission (NCC). In this role he greatly influenced the development of Ottawa’s parkway network, including the Queen Elizabeth Driveway. The Rideau Canal Western Pathway runs along the Driveway which we followed to our next destination  – Lansdowne Park. That’s because the inaugural run of the Ottawa Electric Railway Company travelled down Bank Street to Lansdowne with Ahearn piloting one trolley and Sopper at the helm of another, with an impressive list of dignitaries along for the ride. It was also at Lansdowne where in 1892 Ahearn exhibited a number of his patents and won the first gold medal ever awarded by the Central Canadian Exhibitions Association.

At the extreme north-west corner of Lansdowne, where Holmwood and Bank Street meet, sits the second non-functioning water fountain on our tour. This one is dedicated to Ahearn himself. A history of the fountain pre-re-installation can be found at this link.

There is a short quiet residential street just a few blocks west of the old terminal station named in hounour of Ahearn. Our bike route includes the length of it.

In 1899 Ahearn formed the Metropolitan Power Company to build a hydro electric power house where the Ottawa River narrows, just east of Britannia Bay. This included a 2000-foot canal extending to the lower end of the Lac Deschênes Rapids. This endeavor did not prove to be financially viable, so the top of the canal was converted into moorings for the Britannia Boat Club.

Vestiges of the old canal can also be viewed by following Cassels Street and cutting across the grass to the waters edge at the spot indicated on the above map.

Heading back along the Ottawa River Pathway, our tour crosses one of the few local bridges across the mighty Ottawa River, the Champlain Bridge. In his role as chairman of the Federal District Commission Ahearn played an instrumental role in promoting and financing the construction of the original Champlain Bridge. In 2002 it was rebuilt and this section of the original bridge was put on display on Bate Island, midway across the bridge with interpretive panels on the history of the bridge.

Our route continues along the Sussex Drive bike lane to the round-a-bout to the north of Rideau Hall. In the centre of the round-a-bout the NCC has installed a short section of streetcar tracks reminiscent of the original ones that brought passengers to and from Rockcliffe Park.

The little heritage canopies one can observe while travelling along the Rockcliffe Parkway were shelters for passengers waiting for the streetcar.

Rockcliffe park was a popular destination for weekend streetcar passengers including skiers.

Our final destination is the resting place of Thomas Ahearn in Beechwood Cemetery. To get there we cut through Rockcliffe and then rode a short distance along the Beechwood Avenue bike lane before turning up into the cemetery where one can find this headstone identifying his and his loved one’s resting place. 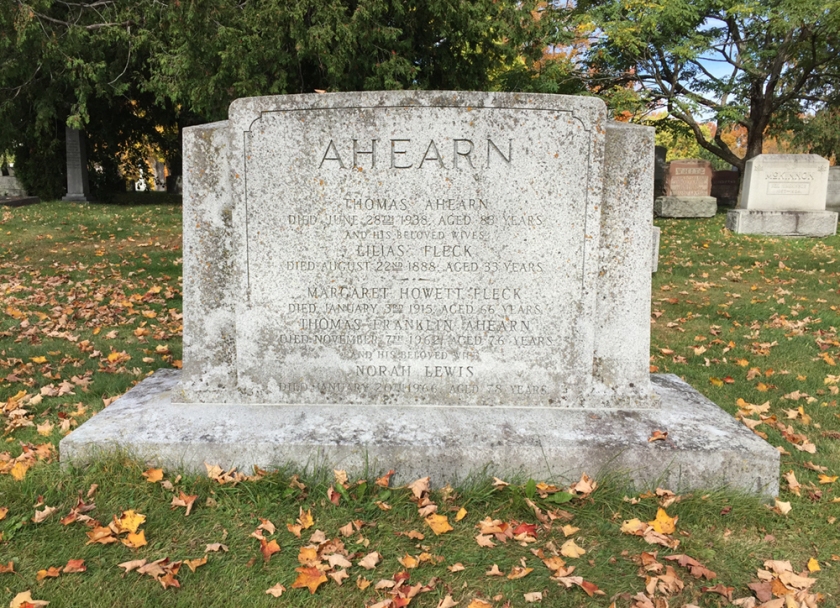 Et voila, thus concludes our bike tour commemorating the phenomenal achievements of Thomas Ahearn. The following links lead to more in depth stories on the man.

A bit more history on the Ottawa Streetcars.

The story of Ahearn and the streetcars from OC Transpo’s website.

Description of Ahearn & Soper’s Ottawa Electric Railway Company within the histroy of rail travel in the capital. Also includes a 1948 map of of Ottawa streetcar routes.

Another fine Citizen article on the life of Thomas Ahearn.

Description of Ahearns patented electric oven and the spectacle he orchestrated using it for “…the first instance in the history of the world of an entire meal being cooked by electricity.”

Article on the status and history of the Ottawa street cars, originally publilshed in 1951.