My son had a hockey game out in Vanier last night, so I biked there. Here’s how.

Sandy Hill is full of big old beautiful houses. That’s because Louis Besserer, who owned most of it when Queen Victoria chose Ottawa as the capital in 1857, decided to develop Sandy Hill into THE place to live for rich folk like lumber barons, diplomats and politicians. And it worked. Laurier, MacDonald, Pearson and Mackenzie King each set up residence there at one time. Now a bunch of embassies have settled into a number of these old gems scattered throughout the area, like Poland, at 443 Daly Street, which looks great at night. They light their ornate front porch with its panelled copper ceiling to great effect. 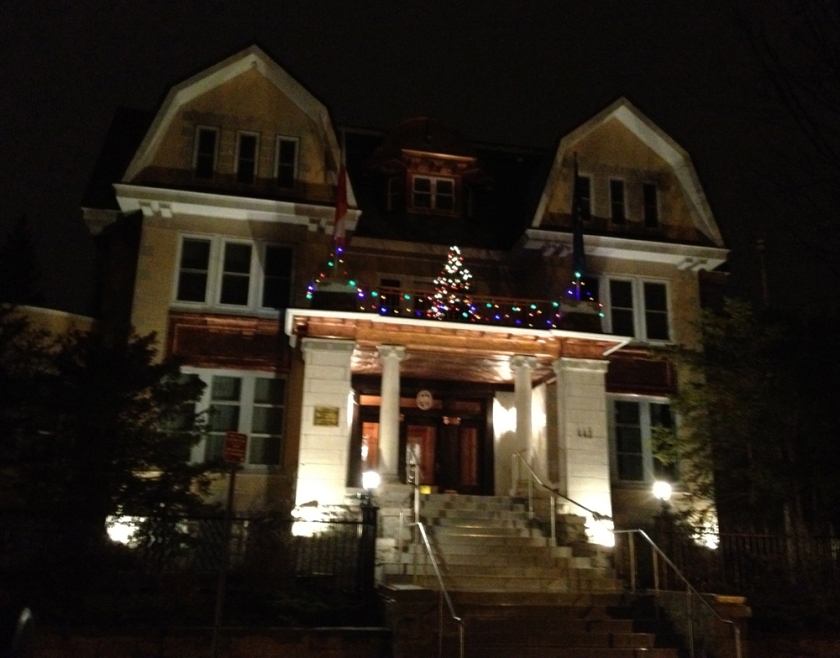 Biking along Montgomery Street in Vanier I noticed a mural on the side of this building, depicting how a Dr Harris’ property along the Rideau River might have looked like back in 1870.

Then I noticed this very funky 60’s style canopy and decorative detail on the same side of the building that have survived the test of time.

Just before I got to the arena I passed this modernist church on Cyr Avenue, graced with big panels of stained glass.

They turned on the annual Christmas lights display along Confederation Boulevard last night, so I checked them out! They will be on every night until January 7th.

Orange line is how I biked to Parliament Hill for the launch. Blue is the route I followed to see most of the official sites.

The flipping of the switch was launched with an explosion of mini fireworks.

Now the route I’m proposing is full of splendid night time sceneries, with or without Christmas lights. The view from behind the Centre Block across the Ottawa River to Gatineau is one such example. Looking out across the river also gave me my first indication that they’ve considerably scaled back on the number of Christmas lights from previous years.

Major renovations are happening on the West Block. Whole sections are wrapped in scaffolding and tarp, creating these internally lit glowing cube structures.

One used to be able to bike in front of the West Block, avoiding having to ride along Wellington, which is not a very bike friendly section of road. Hopefully once the the West Block renovations are completed they will lighten up with the crazy security and once again allow folks to access the hill from the west gate. Otherwise, the first opportunity to get off Wellington is opposite Bank Street, just beyond the closed off gates and line up of parked police cars. First left and a bit further along brings you alongside the wonderfully lit Supreme Court of Canada.

Continuing straight ahead leads to these stairs down behind the Library and Archives building.

Riding around behind the archives building brings you to Wellington right where the designated bike lane begins. Now that’s the way to go!

On the other side of Portage Bridge dip down the bike path to the right where there are some great unimpeded views of the Hill.

It’s pretty thrilling where the path crosses under the Alexandria Bridge. The whirring sound of the cars on the metal mesh road way above resonates all around you, while the beams from the headlights flash and flicker down through the steel girders.

Out in Jacques Cartier Park there are a few arrangements of lights, including this droopy bunch of red ones hanging way up in a couple of trees.

After crossing back over the Alexandria Bridge I turned up behind the National Gallery to re-visit this piece of outdoor sculpture, made up of a number of streetlights blown over by hurricane Katrina. Love it!

In previous years the trees of Majors Hill Park were filled with lights, but this year, nil. S’okay, still a nice ride along the edge of the cliff. Very pleased to discover the terrace above the canal was still accessible from the park to Wellington, affording this dramatic night time view of the Chateau Laurier. The terrace has been previously closed for the winter.

The Cenotaph has lots of cool lights all around it.

Opposite the Cenotaph there is this arrangement of warm lights set against the Conference Centre.

The city has added Christmas lights to compliment the exuberantly lit walls of their outdoor rink in front of City Hall.

I end the tour with this photo from Confederation Park looking towards the Lord Elgin Hotel.

The only official Christmas Lights site I didn’t get to was the one out near the Governor Generals Residence. I will have to figure out a safe night time route that avoids the dangerous stretch of Sussex between the National Gallery and the External Affairs building.

So, it’s Sunday morning, freezing rain, super slippery, and I’m out of rosemary to prepare a marinade. Got to get to Herb & Spice over on Bank, but how? Solution – studs! Whereas last week I was a convert to the concept of studded tires, today I am a full on Preacher Man! The only danger, as a fellow member of the Church-of-Holy-Studded-Rollers explained to me, is over confidence. He described people slipping and falling only after getting off their bikes upon arriving at their destination.

Here’s the safe route I followed to get across Centretown from Bronson to Bank. Blue line to get there, red to get back.

Heading east-west is safest along any street other than Somerset or Gladstone, providing you choose the proper one way direction. Heading south is best along the Percy Street bike lane.

Shiraz food store, located where Percy crosses Somerset, is fantastic for assorted nuts and other Iranian goodies. Their chicken is really good too.

But I was on a hunt for rosemary and I knew I could count on Herb and Spice on Bank to have some. I was not disappointed.

On the way back along James St there are a couple of architectural delights to take in. At Lyon and James is this wonderful row house called Hollywood Parade, built in 1892. Fantastic brickwork, and big round arches.

At James and Bay sits the Power House, an example of the Prairie Style, from 1915.

I then followed the bike path along Bay and made my way home. Mission accomplished!

My friend John and I biked to the opening of The Number 14 at the GCTC on Wednesday night. If you are considering seeing this fun show about a bunch of eccentric characters riding the Number 14 bus through Vancouver, and are looking for a safe bike route to the theatre from Centretown, here you go!

We biked down Armstrong Street rather than ride along Wellington. That’s because the bike lane along Somerset over the O-train bridge disappears and is replaced with sharrows where Somerset becomed Wellington. I’m not a big fan of sharrows. They are those double V’s painted on the road that are supposed to tell drivers that bikes…. actually I’m not sure what they are for. I fear they are being adopted as ineffective substitutes to bike lanes. This section of Wellington Street is full of character, but it is narrow and full of traffic too. Armstrong is much quieter.

What a hoot to see this great big old OC Transpo bus from the 50’s sitting outside the theatre! As a tie-in to the theme of the play, GCTC and OC Transpo are doing a cross promotion called ‘From Their Seat to Our Seat’, hi-liting the various bus routes one can take to get you to the theatre on time. Great idea – taking the bus is a fine mode of transpo, after biking of course.

There are a number of bike stands along Wellington just to the right of where the bus is parked, beyond the frame of the picture.