So, it’s Sunday morning, freezing rain, super slippery, and I’m out of rosemary to prepare a marinade. Got to get to Herb & Spice over on Bank, but how? Solution – studs! Whereas last week I was a convert to the concept of studded tires, today I am a full on Preacher Man! The only danger, as a fellow member of the Church-of-Holy-Studded-Rollers explained to me, is over confidence. He described people slipping and falling only after getting off their bikes upon arriving at their destination.

Here’s the safe route I followed to get across Centretown from Bronson to Bank. Blue line to get there, red to get back.

Heading east-west is safest along any street other than Somerset or Gladstone, providing you choose the proper one way direction. Heading south is best along the Percy Street bike lane.

Shiraz food store, located where Percy crosses Somerset, is fantastic for assorted nuts and other Iranian goodies. Their chicken is really good too.

But I was on a hunt for rosemary and I knew I could count on Herb and Spice on Bank to have some. I was not disappointed.

On the way back along James St there are a couple of architectural delights to take in. At Lyon and James is this wonderful row house called Hollywood Parade, built in 1892. Fantastic brickwork, and big round arches. 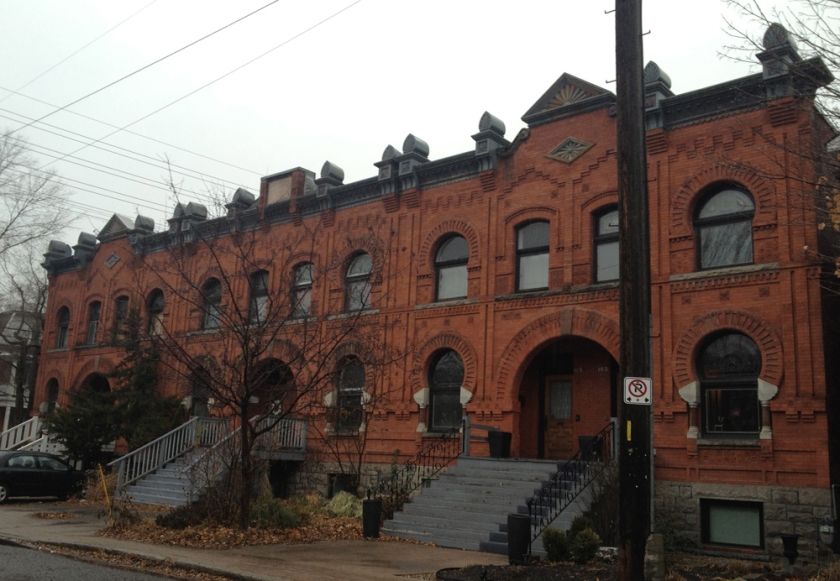 At James and Bay sits the Power House, an example of the Prairie Style, from 1915.

I then followed the bike path along Bay and made my way home. Mission accomplished!