My goal is to pedal down every Ottawa/Outaouais street at least once. For some streets, once is enough. Like Slater Street and Queen Street, which I rode along yesterday morning. They are not very bike friendly, regardless of the green bike ROUTE signs fastened to the occasional telephone pole. But they ought to be safe to bike down for folks who work there, live there or need to ride down them for whatever reason.

At the corner of Bronson and Slater there is a very wide graffiti wall. Here’s how it appeared through the frost covered chain link fence.

Slater is three lanes heading east one way. The south side is pretty much a transit way, forcing bicyclists to hug the shoulder-less curb on the opposite side. Drivers instinctively consider this outside lane to be the passing/speeding lane. Pretty nasty.

I was pleased to turn up Elgin Street and see Oscar sitting outside the NAC covered in a frosty layer. This wonderful commemorative statue by Ruth Abernethy is extremely welcoming. I often see folks sitting on the piano bench beside Oscar, listening to his music coming from speakers placed up above.

Construction scaffolding and plywood presently surrounds the main entrance of the post office at Sparks and Elgin, caging in this noble sentry.

Fortunately these two proud beasts remain on duty at the side door on Sparks St.

I travelled down Queen Street on the way home. It felt safer than Slater, perhaps because there was only one lane keeping the traffic calm.

The narrow space between the parked cars and the traffic presents another very real danger of being doored, i.e. when a passenger of a parked car opens their door without checking to see if any bicyclists are coming, forcing a collision. This is what lead to the senseless death of Danielle Naçu in October 2011. Here is the ghost bike along Queen Street commemorating this tragic event.

They knocked down part of Christ Church Cathedral awhile ago along with a few other old dwellings to build condo’s, but retained these facades to be incorporated into the new building. I am often fascinated by the juxtaposition of temporary structures used to retain or protect old structures as shown in this image.

And finally, a shot of Jack Frost’s handiwork, looking out towards the park at the western end of Queen St. 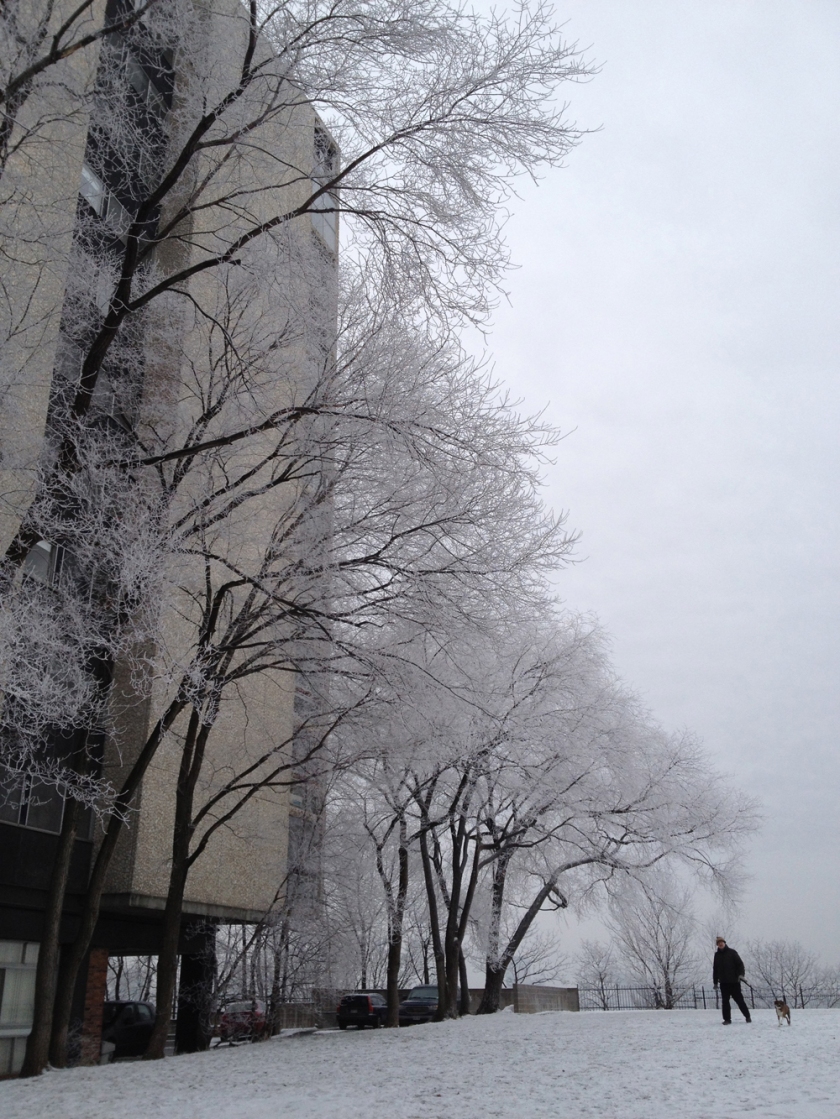 4 thoughts on “Biking along Slater St and Queen St”