For this year’s Ottawa Children’s Festival, one of the plays, The Legend of Swan River, will be performed at Remic Rapids Park, located 3 km’s upstream from the main site on Lebreton Flats.  There will be a shuttle bus to transport audience members from Lebreton Flats to Remic Rapids Park, however one can also bike to the site along the very pleasant Ottawa River Pathway. Here’s how. UPDATE: May 18 – This year’s Children’s Festival has come and gone, but this route remains a great ride from Lebretton Flats to Remic Rapids Park.

Starting from the entrance arch to the Children’s Festival along Sir John A MacDonald Parkway, follow the path to the western end of Lebreton Flats where it joins the Ottawa River Pathway.

Continue heading west and upstream. You’ll soon go over a little bridge before continuing along the edge of the Ottawa River.

The path also passes under the Prince of Wales train bridge, then meanders pleasantly all the way to Remic Rapids Park.

There is a fork in the path just before arriving at the park. Stay to the right along the water’s edge.

A short distance from the fork you’ll notice a concrete lookout. Take the gravel exit opposite the lookout. This is where the play commences.

I didn’t notice any bike racks at the Remic Rapids site, however there are many sign posts around the edge of the parking  to which one can lock your bike. 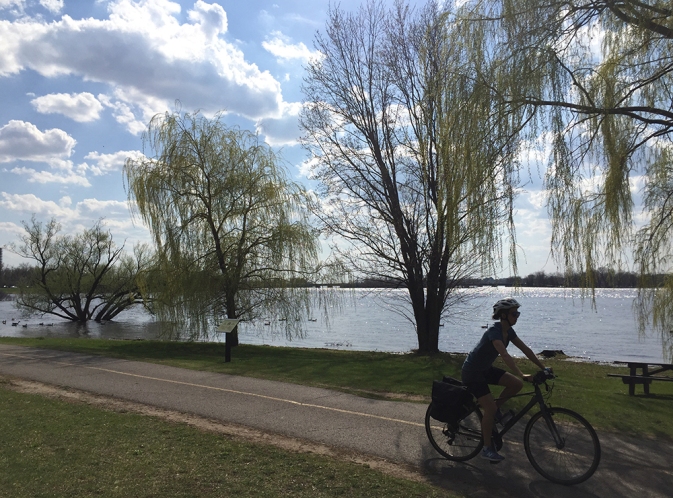 2 thoughts on “Biking to see The Legend of Swan River”