Kurdistan is a geo-cultural region spanning a number of countries in the middle-east in areas where Kurds form the majority or significant portion of the population. This tour visits the embassies of those countries.

We begin at the Embassy of the Republic of Armenia at 7 Delaware Avenue, a Spanish Colonial Revival style mansion built in 1908. The monument ‘Armenia Immortal’, located in front of the embassy, was sculpted by Levon Tokmadjian and unveiled in 2002. The Kurdish population within Armenia is primarily located in the Western portion of the country.

Next stop – the Embassy of Iraq at 215 McLeod across from the Museum of Nature. Built in 1957 in the modernist style, It has fallen into disrepair. A 2012 Ottawa Business Journal article describes plans for it to be demolished and replaced by a four storey building that would continue to house the embassy.

A large number of the Kurdish diaspora that settled in Canada were escaping purges in northern Iraq by Sadam Hussein, as described in this story by Kurdish-Canadian Susan Mohammad (click).

The Embassy of Iran is located just a few blocks away up Metcalfe St, a one-way heading north. It’s not a great street to bike down at rush hour (7-9am & 3:30-5:30pm) when there’s no parking on the east side of the street as it becomes a three lane speedway. During the rest of the day it isn’t so bad, as the remaining lane beside the parked cars is ample, however watch out for drivers who still tend to go crazy fast in the two remaining lanes. Many of them must be on a lingering reckless Queensway adrenaline rush.

Housed in a post-modern style brick building, the Iranian Embassy must be pretty quiet as all Iranian diplomats were expelled from Canada in September of 2012.

The Kurdish population of Iran are located in the north-west part of the country in an area known as Iranian Kurdistan along the borders of Iraq and Turkey.

Next stop – The Syrian Embassy on Cartier St. It too remains quiet, as all Syrian diplomats were asked to leave in May of 2012 as a result of war atrocities committed by the government in the ongoing civil war.

Kurdish inhabited areas in Syria lie in the northern and northeastern regions of the country.

Final stop – the Embassy of Turkey at 197 Wurtemburg St. To get there I rode over the bike/pedestrian bridge across from Ottawa U. Hundreds of love locks are attached to the bridge railing overlooking the Rideau Canal. I then cut through Sandy Hill.

While the other four embassies are located in Centretown, the Embassy of Turkey finds itself on the edge of Sandy Hill overlooking the Rideau River in a sprawling Tudor style manor constructed in 1869.

Kurds are the largest ethnic minority in Turkey, and are primarily located in the east and southeast areas of the country.

On my way back through downtown I happened upon a group of Kurdish Canadians demonstrating in support of their brethren who are defending the Syrian town of Kobané from the Islamic State on the border with Turkey. Here they are. 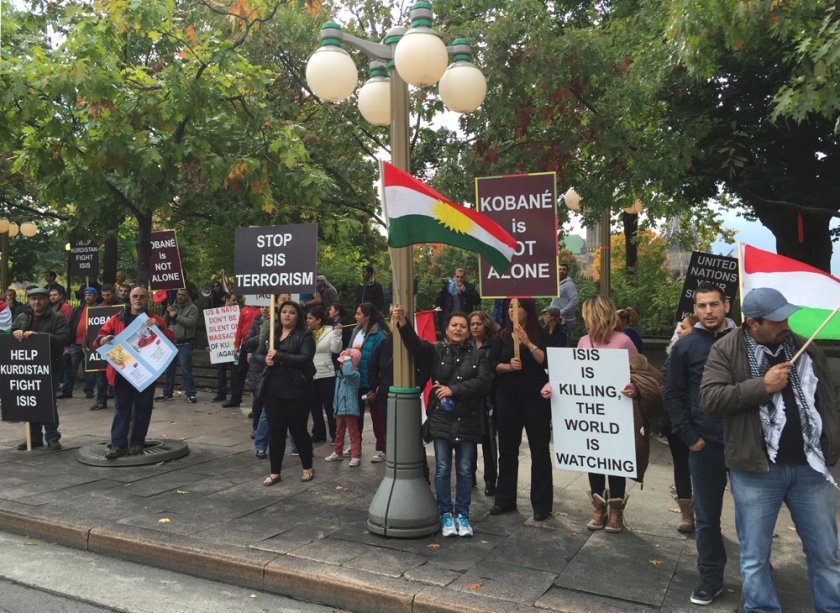